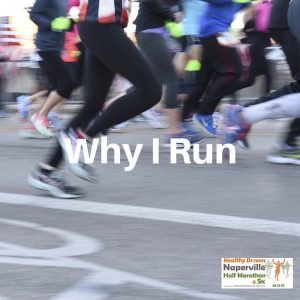 Committing to a training program or race is difficult. It takes hard work and determination. But if you stick with it, the benefits will return to you tenfold. Seasoned runners know the truth about those running benefits. They’ve experienced them firsthand. We asked local runners how the practice has changed their lives and their answers are sure to inspire excitement, motivation and solidify your personal “why” behind your commitment to running. A new way of life, full of confidence, community, clarity and improved health is within your reach.
———-
“Running has done many things for me, the biggest three being that I am healthier, stronger and more confident. Healthier, because I eat a better diet with less processed foods and don¹t consume drinks that
contain high amounts of sugars. Stronger, because since I began running, and then running longer and longer distances, it became clear that if I included strength training I would become a better runner due
to having less injuries (meaning I could run faster or even longer). Confident, because running built confidence it put me in a mindset that if I could run one mile, I could run two or three, and then a
marathon. This mindset has stayed with me for everything I do, from running to work or any kind of project I would work on. It taught me to stick with what you start, keep learning about it and you can achieve
anything you set out to do.”

Walter Wendel, Downers Grove
———-
“I took up running fifteen years ago, prior to that I avoided running and any exercise! I started out slowly by running a block and walking a block and worked up to longer distance and faster paces. There are days
I don’t feel like running but after I do I always think to myself, I feel better and I feel good about myself for having accomplished my run. Running has not only made me physically stronger, but it has also transformed me mentally making me more confident, happier, and more relaxed. Running is something I do for myself to be healthier and happier!”

Laura McElligott, Westmont
———-
“I started running soon after I turned 40. I had a 5-year-old and was a teacher and was constantly doing everything for others. I was about 15 pounds heavier, had borderline high blood pressure and was on
antidepressants. One day I looked at myself and thought, ENOUGH! I started running since I had seen it help so many people get in shape and lose weight. I was not good at it. I didn’t like it, but I decided
to join a “couch-to-5K” group at a local running store. (Thanks Dick Pond Lisle!) The program made it possible to progress. The “graduation requirement” for the program was to run a 5K so I ran my first 5K at
the Morton Arboretum. From there, the obsession started. Once you realize a 5K is within your grasp, you sign up for another. Then you chat about running with friends. Then a good friend (who runs) pulls
you in and says, “It’s really not that far.” Then you are running five miles. Soon, you run your first 10K. Despite the fact that running is still hard and sucks, you make progress. You lose weight. People
comment. You start looking at where you place among others your age in race results. Now you are running a lot and get injured. So you find the trainer (hi Laurie!) who gives you the exercises and conditioning
to get you back running. You try to decide what to do next. There are not many options between a 10K and that long, long half marathon (I could never do that!). Your trainer tells you things like, “Of course
you can run a half marathon.” And all of a sudden, you do it. It’s ugly but you do it. At this point, you run a lot. You have running friends that ask you about running. You are tired but get up to run because you
know someone is running outside while you are lying in bed. And you find that you are signing up for your first marathon because someone convinced you that you can do it and because you have gotten so
competitive that you are going to make yourself run that marathon.
At this point, I have run three marathons. I am slow but I set goals for myself…and accomplish them usually. I am a somewhat competitive person and I can race and compare myself to others in the old 50-54
year age group. It makes me keep pushing to get better. (And the older I get, the fewer people run! I’ll be great if I can run when I’m 80.) I like to be an example for my family. I’m happier, way healthier and will run as long as I can. I still often don’t look forward to a run but I will do it and feel a sense of accomplishment when it¹s done. I guess if you are going to have an addiction, it could be worse.” 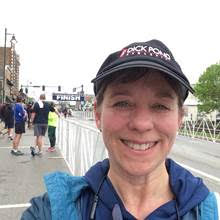 Michelle Sachtlebens, Downers Grove
———-
“It was in 2004 that I more or less stumbled upon running as an activity. My high school daughter had a friend who was part of a running family and she made the decision to join her friend in running a 5K Turkey
Trot. I decided to join them and was told that I needed to follow the Hal Higdon training program. I printed it and followed it like it was delivered by Moses from the Mountain. The only time I cheated is when I
ran three miles for the first time and I was only “supposed to do 2.75.” I did the 5K that fall and running has been part of my life ever since. My running correlated with a stressful time at work and I came to see the benefits of large muscle movement in helping one handle stress well. Running also introduced me a group of friends through a Saturday morning running group, which led to two team relay races. So running has been part of a lifestyle change that resulted in dropping thirty pounds, provided a good excuse for being out in nature and a space for prayer and meditation.” 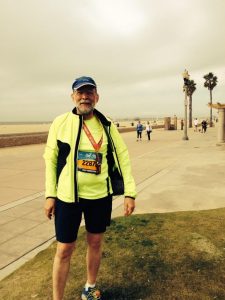 Jim Wilhoit, Naperville
———-
“Running has changed my life in several ways. Running made me live healthier and become stronger. I eat more nutritious food, because my body craves it, wanting to be refueled for the next run. In return, my
body got stronger; not just my legs, but my core and even arms became more toned and my overall health improved. Beyond the physical, there is a mental change. Logging those many long runs, I have experienced
that I can do way more than originally thought. I learned to let the panic of failure to keep running abate. Breathe! Pace yourself! Relax and keep going. No, that doesn’t work all the time, but it works more and more often and I am able to accomplish something I was certain wasn’t possible. I learned that I cannot force it, but as long as I stick around, just for the moment, there is a good chance things will turn my way. And that doesn’t just work when running, it applies to all aspects of my life. I feel more confident and became more patient to have success find me, just put in the work and in the long run, things will turn out ok.”

Peter van Gemmeren, Lisle
———-
“When I started running many years ago, I did it to lose weight. As time went on, the reasons changed. I found that I loved the way I felt after a run, the fitness it provided, the clearing of the mind. Because
I was feeling more fit, it made me rethink my eating. I started making better food choices. Physically, running has made me a healthier person. In addition to the physical gains, the following have changed for me: meeting new friends, taking on a challenge and succeeding, increased self-confidence, realizing hard work does pay off. Mentally, running has made me a better, happier person!”

Carolyn Olsen, Downers Grove
———-
“Running has impacted my life in many positive ways. After I started running, I became physically stronger and more mentally resilient. As a runner, I have learned to fuel my body with the right nutrition and diet for better performance and overall good health. I’ve lost weight and have maintained my ideal weight even as I’ve aged. My energy level has increased and my sleep improved. The best way running has changed
my life is my new confidence. I started out believing I could only run a few miles and recently just completed my fifth marathon. That confidence has extended into other areas of my life. Being a part of
the running community has been another benefit. It has been a great way to connect with people. Runners are always ready with words of encouragement and tips for staying motivated. I’ve been inspired by so many runners I’ve met over the past few years. I can’t imagine my life without running.”

Mary Cady, Clarendon Hills
———-
“Running has been a part of my life since my high school days when I was on the cross country team. Back then, the camaraderie and the competition were what made running so enjoyable. There was a structure and routine to my training and the races provided a gauge for progress and achievement. Then, for nearly 40 years, on my own with minimal motivation, running was something I did occasionally, lacking any regularity or consistency. I ran when it was convenient and did not push too hard or challenge myself by entering road races. A couple of years ago, with the help of a personal trainer, my training took on more purpose and I changed my weekly routine to include regular running and what a difference it¹s made. Now at age 61, I have a renewed joy for running and I¹m in the best shape I¹ve been in decades. I have increased energy and focus in my daily life, and enjoy the company and support of a running community at my health club. I have also rediscovered the fun and challenge of participating in (road) races again. In the past 14
months, I¹ve run two marathons and two half marathons with plans for two more marathons this fall.”