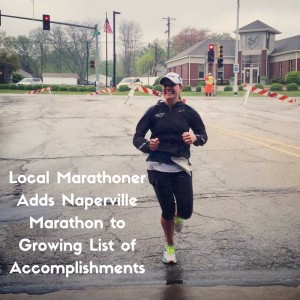 After being a high school dual-sport athlete, Katie Bryk was looking for a way to stay in shape when she went off to college. She found a niche in distance running, running 5k and 10k races and while student teaching her senior year of college, Bryk had one student that motivated her to go the extra distance, extending her mileage to 26.2.

“I had a first grader in my class that was suffering from Leukemia whose family had received support from the Leukemia and Lymphoma Society of America,” said Bryk. “I learned about LLS’s marathon training program – Team in Training – and decided if this little boy could battle Leukemia with a smile on his face, I could run a marathon and raise funds for a great cause at the same time.”

So avid that she had completed forty marathons by her 40th birthday.

“About 5 years ago I was doing the math in my head and I figured out if I ran 3-5 marathons a year, I would be able to complete my 40th marathon before my 40th birthday. I had done 10 marathons from 1999-2004 before taking time off to have my two sons Payton (11) and Will (9). I returned to marathon running eleven months after Will was born when I ran at the Chicago Marathon in 2007. From October 2007 through April 2016, I ran thirty marathons.”

Her love for the sport and passion to help others enjoy it as much as she does has landed her at Fleet Feet Sports in Elmhurst as the head coach for the marathon and half marathon programs.

“Running is a very unique sport,” she said. “You can run alone, with a friend or two, or a training group of a 100. For me, it gives me time to clear my mind and reset for the day. Running is my yoga.

“I’m very fortunate in that my favorite running buddy is also my husband,” she continued. “We have had some great trips together that were tailored around a marathon—Mardi Gras Marathon, Napa Valley Marathon. I’ve also had Girls’ Trips that revolved around marathons.”

Even though she has traveled across the country for the sport, Bryk has one marathon that is close to her heart and on her calendar every year: the Healthy Driven Naperville Marathon.

“As much as I love traveling for races, I’m a homebody,” said Bryk. “When I was in high school, my family moved to Naperville and I called Naperville home and I spent many high school nights at the Riverwalk!

Bryk will be at the starting line again this year alongside thousands of runners on Oct. 23 in the marathon’s fourth year. With a new course design, race day gear options, and post race activities, it’s one that Bryk and runners alike do not want to miss.

Needless to say, after forty marathons, Bryk has a vault of advice for others who want to get involved in the sport, whether that is a mile down the road or 26.2 miles.

“Whether someone wants to run a 5k or a marathon, they need to recognize that running is 90% mental and 10% physical,” she said. “Once you release the demons that tell you – you can’t – you can do anything.

“I also recommend that new runners—and lifetime runners, too—consider training with a group. Running with someone makes the miles fly by; going into an 18 or 20 mile run with a group is a lot less daunting then going into it alone.”

While her goal of reaching 40 marathons before her milestone birthday may be complete, Bryk is nowhere near finished with her training and is looking to achieve new goals. This past year, she achieved another goal: running a qualifying time for the most prestigious race of them all.

“Last year I made the commitment to myself to train for a Boston qualifying time, and at last year’s Naperville Marathon, my training paid off and I ran a qualifying time,” she said.

“I am a goal setter,” she said. “Once I finished my 40th marathon I knew it was time to start thinking about a new goal. A 50-miler seems like a perfect new goal for me.” 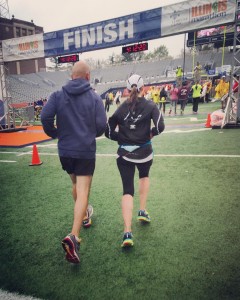 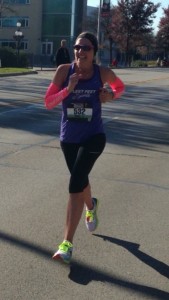